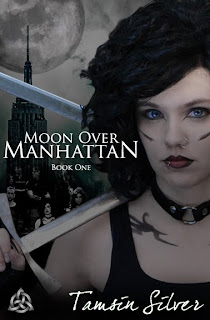 As some of you know, my writing is very visual and my characters are where I put my focus. That can be said even more so for Moon Over Manhattan, the sequel series to the Living Dead Girl books (the first of which is available through Eirelander Publishing via my website). It was so visually in my head, that even before I finished it, I did a photoshoot of the characters in Central Park in October of 2010 and then a few more in June of 2011. See Pics Here. Now, because of these facts, I've always liked the idea of doing Moon Over Manhattan as a graphic novel. 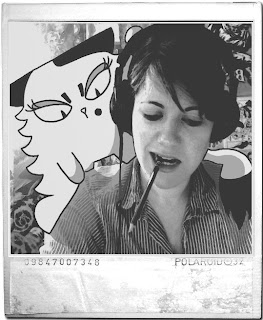 That's right! I am here today to tell you that my friend, the talented Ana Catris (Pictured Left), has "signed on" to work with me to make that happen! To say I'm "excited" doesn't really touch how I feel. I'm "bounce in my chair, scream to all can hear me" excited!!!! LOL!

She is also a published writer/artist as well. This is her book, and you can get it on Amazon HERE! 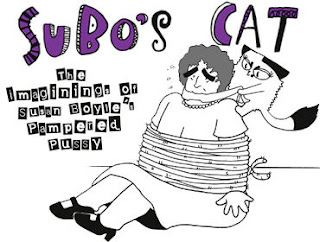 Here are some examples of her work that she's taking to a convention this weekend: 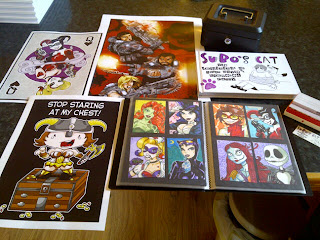 Here's a nice close up of one of the prints while on her computer: 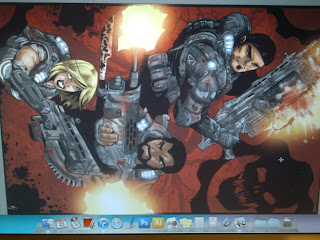 If you were at my Book Release Party this past October you had the honor of meeting my loverly blue-haired, UK, lady. And if you follow me on Twitter I tend to RT her costumes and drawings a lot.

And before you ask, no, I do not have an offer from a publisher on this project...but once we have the first section of the book done, you can be sure we'll begin to shop it around. *Fingers Crossed*

Now, you may be asking, "Why not Living Dead Girl?" That's a good question. It comes down to the fact that LDG already has a platform, in print, with Eirelander Publishing. They own that story right now and even if they didn't, Moon Over Manhattan has a bit more punch...literally. More fighting (can you say sword and gun fight in Central Park to open it off with?), fewer characters, fewer locations, fewer perspectives (only two in this book), and a kick ass female character (Denika) that my Beta Readers say is one of their favorite female character they've ever read. She's based on a mix of three people: Me, my longest best-gal-pal (20 yrs) Angie, and some of my bestie in NYC, Lauren (who modeled for Denika), thrown in.

Ana will get to have fun drawing goth/industrial clothing & body art, goth/industrial clubs, sword fights, and NYC in all its glory...as well as those cool yet flawed characters. Characters who fight to figure out their own life while they save NYC from those who wish to start another war within the Clandestine World in 2010, a year after the LDG Series concludes.

So stay tuned for more news and samples of the work Ana and I will post here and on HER BLOG. You can also follow her on Twitter: @anacatris if you want faster updates to the project and other things she's working on.

One of my fave candid shots of me and Ana at my book release party (with Lauren as well in her long dark wig): 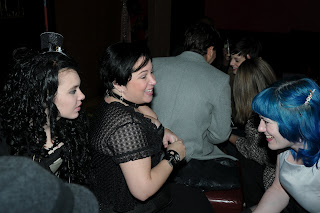 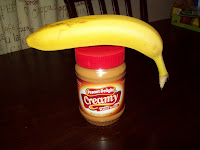 Have you noticed that?

We write, we munch, we write, we get up to get something from the fridge, we write some more...etc.etc.etc. At my Writers Group we almost always have something to pass, at our Write-Ins we bring food or we write somewhere where they sell it, and at our social gatherings...food is around also. And its good stuff! Our gal Marsha can bake! :)

Most writers also consume MUCH caffeine. WAIT! I'm not going to say DON'T drink it! If you need caffeine, by all means, drink it! I don't drink it often because I have a slight alergy to it (*waves away the sorrowful condolences*). I know, I know, it sounds like the end of the world to some of you, but I'm fine. If I'm not drinking tea I live on Orange flavored Crystal Light, Orange flavored Vitamin Water Zero, and Diet Sunkist. Do you seeing the pattern there? I have an addiction to Orange vs. Caffeine. Meh. It is what it is. And yes, Sunkinst has caffeine, as does my tea...so I can have only have one OR the other in a day. Not both. I tend to opt for the tea if its winter and the soda if its summer.

I'm here to talk about food. I just got side tracked there for a moment. Forgive my ADHD.

Over the summer I was getting my first book ready for publishing AND I broke my hand. Between the writing munchies and no exercise due to my hand I put on a bit of weight. Ten pounds to be exact. So now I'm doing WEIGHT WATCHERS. I'm even going to meetings. I need the accountability. Someone who looks at that scale with me and says, "You lost" or "You gained." In three weeks I've lost 4.6 lbs, btw. Yay me!

Now, because the new Points Plus plan has FREE foods I've found I truly am eating more fruit. Veggies were always free of points, but fruit? That's new. So, for instance, one of my late afternoon snack options (that I'm eating right now) is a banana and 1 Tbs of reduced fat peanut butter. Since the banana has NO points I just have to count the peanut butter. It used to be a serving of chips or a 100 calorie bag of something sweet.

Because of these better choices I've been making I don't get what I call the Blood Sugar Droops. You know, where you suddenly can't keep your eyes open and your head droops as you sit at the computer? You know what I mean, right? I'm not the only one, am I? O_O

My point is, I'm appreciating this lack of the droops. I hate becoming non-productive. Don't you? So, as I'm on this journey to lose those 10 lbs and another 10 for the health of it...I'm going to toss up any cool food ideas to you writers on here...to give you great ideas to snack on when you write.

Cause we writers like to eat. And we shouldn't have to stop.

Tamsin :)
Posted by Tamsin Silver at 3:30 PM No comments: