I need a name for a private eye firm...or more exactly, the name for an independant firm of witch hybrids who take jobs to pay the bills, whether it be helping find someone's lost belongings, collect stolen property, figure out if your spouse has strayed with a new lover or is dabling in bad magicks, or helping you keep that pesky stalking vampire out of your window if he's sneaking in to watch you sleep....

I'm opening up to the interwebs to help me pick cool name for the investigative team of six. I still have no last name for the leader (first name is Jazmin) so we could come up with a cool last name that makes a good name for the firm.

All members of the team are witches, but are mixed with other forms in the Clandestine World. There's two vampire mixes, two shape-shifters, and two werewolves (twin girls) and it takes place out in San Francisco. So...any fun ideas for catchy names for  private detective firm of witches who deal with human and non-human issues, would be great.

If I choose yours, you'll get mentioned in the acknowledgments of the book and I'll work your name into the story. 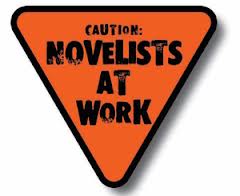 So, how is your NaNo going?

I usually am WAY ahead of the word count, but after I spent the past few months being a crazy with editing and working myself to the point of exhaustion with The WINDFIRE Series, I need to NOT be making myself crazy.

I am, however, until today (cause I've not written today, yet) getting my 1667 word count a day in. In fact, I actually skipped writing on Saturday to swim, have a nice brunch with a gal pal of mine from the gym, and then read the rest of the second novel in the Alex Craft series written by a friend of mine, Kalayna Price. In fact...I didn't write until Sunday afternoon when I finished book three of the series. I'm actually afraid to start my friend Faith Hunter's series (I got book one on my Kindle ready to rock!) but if I get caught up (which I'm sure I will) I'll not write and this month is for writing. So...I shall put my new Kindle down and write instead. It'll be hard...but...I will have a fun book to read as of December first. Oh, and my pocketbook will appreciate me not buying books right and left for a month.

I'll do a review of the Alex Craft books soon...but until then, just go bloody buy them. You can thank me later.

And it's now my lunch break. Time to do that writing thing I have been talking about...caio!

Tamsin :)
Posted by Tamsin Silver at 3:10 PM No comments:

Halloween Has Been Canceled? 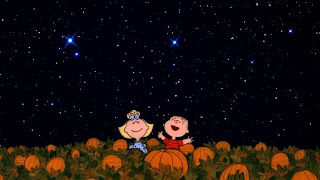 WHAT? HALLOWEEN IS CANCELED?!

WHAT ABOUT THE GREAT PUMPKIN?

CANCELLED, TOO. SORRY LINUS.
﻿
﻿ ﻿
That's right! As far as NYC and the coastal part of NJ is concerned...Halloween has been canceled. The parade has been canceled and my party tonight has been as well. Correction, tonight's party has been "postponed."


Thankfully I went to two Halloween parties over the weekend! The delay in getting this post up is because I was waiting on pics from others who had no power due to that bitch Sandy. 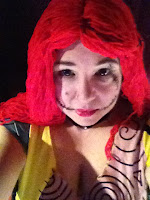 On Friday night I left work a hair early to get home to get into costume. My best gal pal in NYC was dressing as Jack and I was dressing as Sally (The Nightmare Before Christmas). The costume gives me the shape of a giant redwood tree...so I added my clear plastic waist piece (it doesn't cinch in, but it was better with it than w/o it, trust me). The pic to the right is Lauren and I while the pic on the left is me in the make-up while I was working the Vampire Freaks booth at their Halloween Massacre Party over at Gramercy Theater. It was a mini-Triton-Festival, too. Bands started playing around 8pm ended at 3am-ish. Many were in costume...and sadly I don't have more pics of those in the costume contest as I was backstage helping them get on and off the stage vs. out front taking pics. But the girl who won had made this bad-ass costume from a video game with body armor and a big gun...the oufit even lit up. I'm sure VF has a pic of her somewhere.
﻿
﻿
﻿
What was truly spectacular was that the two top bands to play that night were Imperative Reaction (they are one of my favorite bands). I happen to know their usual keyboardist, Clint Carney (Who wasn't with them this tour due to his artwork doing well in LA...GO Clint! Woo! ), have met Ted Phelps (lead singer), and respect their drummer, Trevor Friedrich. He's an amazing tattoo artist as well as a phenominal drummer. They performed for about an hour were absolutely fantastic!

﻿﻿﻿
﻿As I watched them from the side of the stage (floor level) the doors to backstage opened and out walked Tom Shear, aka Assemblage 23. I'd met him briefly last year and so we chatted briefly. He's a really nice guy. So, if you like his music (the new album is great, btw), know that he's worthy of his fame. I personally hate celebrities, no matter how big or small, who are such assholes that they don't deserve the money or fame. Tom isn't that guy. ﻿﻿﻿
﻿﻿﻿ 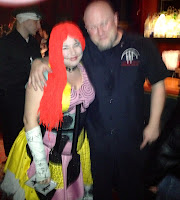 Tom did an hour and a half set...plus encores (that he just did, w/o making us scream for them) and then signed CD's and took pics after. Sadly, the pic we got of me with him turned out blury...but I posted it here anyway. :)

I think I got home and was in bed around 5am...but it was totally worth it! Vampire Freaks put on a fun night yet again!

On Saturday my pal Matt from Boston arrived (so he could go to a concert in Brooklyn on Sunday) and I dragged him to my Writers Group's Halloween gathering. I'd just spent the night before in costume and had no desire to figure out another one...so I went as myself, as did Matt. We ate good food, drank great liquor, and talked with my writing pals until midnight. Here's a pic of me and Matt and the glowing ghosty, taken by Alexis Daria. She always takes the best pics of me. 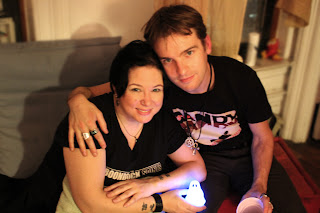 If you are asking where our costumes are....well....we sorta sucked at that. I only had the one costume and didn't want to wear it two nights in a row. If I'd gotten my the lab coat I was trying to snag from my boss at work I'd have dressed as Abby from NCIS...but, oh well. Next year. :)

Sadly you can't tell the ghosty changes colors...I begged Erin for one. I'd have it out all year...but that's me.

Hope you all had a wonderful Halloween, even if it was truncated by Sandy. Right now I'm excited for November and NaNoWriMo...not just to write, but to spend time with my writing gals/guys! If you are doing NaNo...drop me a line! tamsinlsilver@gmail.com 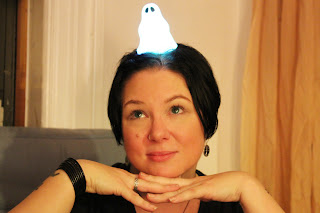 Posted by Tamsin Silver at 2:50 PM No comments: