Skye MacKenna (played by Lauren Steinmeyer) along with friends Madison, Kyle, Silas, Phaedra and Shana attend Jillian's wake, where Skye is introduced to both sides of New York City's royality... the Vampires and the FAE. Jillian's mother, Violet Murphy (played by Melissa Silver) confronts the Vampires for not protecting her daughter from being murdered, and sets a brawl into motion. Once again, Skye finds herself in the middle of a battle between the Vampires and the FAE, and she quickly learns what she is truly capable of, and meets a new ally along the way.

I love this episode! It's actually the most recent one we filmed and we did so in Brooklyn at this amazing loft in Bushwick. One of the reasons I'm so happy/proud with it is not only because it has some GREAT fight work in it, but we had two very full days of shooting that went pretty smoothly considering there were a minimum of 50 people on set each day (counting cast, guest stars, fighters, extras, and crew). It was our biggest episode yet (we had two, 4-hour fight rehearsals just to prep for it) as well! Things were also tricky because our DP (Nyle Cavazos Garcia) now lives in LA, so it changed how we worked as a team. Plus, he was directing this episode instead of me, so that also tweaked the usual flow. However, I think it did so for the better. It was really lovely to work with the actors and assist the director with things vs. direct the show. I sincerely think that writing and producing is plenty and I plan to step away from directing on the show for the rest of the season and likely the next season as well. I'll still be on set, but my hats go from around four, to two...much better.

Oh, and I also happen to adore this one because we introduce the world of SKYE! You get to meet a lot of new characters that I've known about for over a year and a half (and were cast ages ago). Specifically the characters, Declan Sinclair (played by Hunter Thore) and Hayden Fletcher (played by Philip de la Cal). Plus, I was able to bring in a special guest star, Melissa Silver (no, no relation), who I have worked with before and has an impressive IMDb page.

Now, without further ado...here is Episode 5!

OR just head over http://vimeo.com/ondemand/skyeofthedamned and select Episode 105!

With FIGHT CHOREOGRAPHY BY CASEY MATTESON

featuring the song "We Are the Vampires" by TRANS ATLANTIC CRUSH
available for download at transatlanticcrush.com

SKYE Episode 5 Teaser is up! 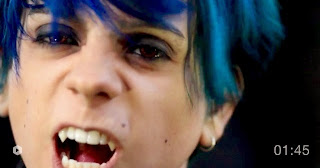 Check out the explosive teaser for Ep. 5, "WAKE."

SKYE OF THE DAMNED
created by Tamsin L. Silver

featuring the song "We Are the Vampires" by Trans Atlantic Crush

Posted by Tamsin Silver at 2:00 PM No comments: