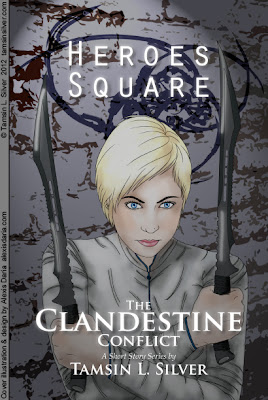 In the year 2131, humans thought they could fix the dissolving ozone layer and global warming by releasing a biological agent into the sky.

Luckily, the Clandestine People, comprised of witches, werewolves, vampires, and shape shifters, foresaw this outcome and saved as many of the humans as they could.

Prejudice.
It's not as old fashioned as you might think.

The first part of The Clandestine Conflict, "Heroes Square," takes place 147 years in the future from where The Betrayal (the first novel in the Living Dead Girl Saga) starts.

See what happens when there is no sun.
See how the grandchildren of characters you loved in The Betrayal
handle the conflict rising between their kind and the humans.
----------------------

YOU CAN ONLY GET IT IN PRINT AT THE CON!

SO SEE YOU THERE!

Note: You'll be able to get it online for free later this summer as well through my website.

Posted by Tamsin Silver at 12:15 PM No comments: 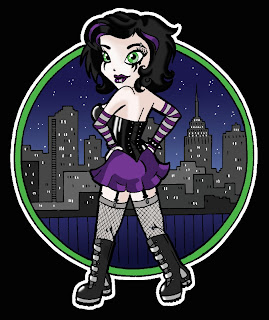 Drawn by the every amazing, Anastasia Catris.

I will have this in sticker form at Heroes Con for FREE!

And...each sticker will have a number on the back....

Each day I will draw a winning number and that person will win...

A Thumb Drive filled with:

So if you're going to be at Heroes Con in Charlotte, June 22-24, I suggest you stop by for one of these cool stickers!

Posted by Tamsin Silver at 11:30 AM No comments: