Swords are Sexy (and fun) 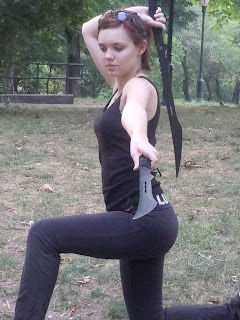 So, what did YOU do with your evening last night? Me? Oh, I watched my girl Lauren learn to fight with swords. Yeah, it's as cool as it sounds. :)

We're gonna jump books for a moment and go back in time to Moon Over Manhattan (you know, that first photo-shoot I did). Pictured to the left here is Lauren Steinmeyer, the model for Denika Petrovskii in the Moon Over Manhattan shoot back in October 2010. You'll note she is out of wig and costume...but that's because she's being taught how to fight with two swords...like Denika does in the books.

You're probably asking why...

The sequel has been bopping about in my head a bit, to be honest. And early in the book Cash gives Denika some cool new swords. They're smaller and lighter than her usual swords but easier for close range fighting and they can do some serious damage. They've got a smooth/sharp edge, a severe point AND a serrated edge in the center. ----and yes, these are actually stainless steel and sharp---- 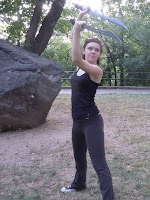 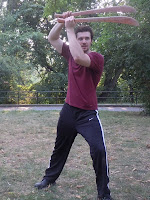 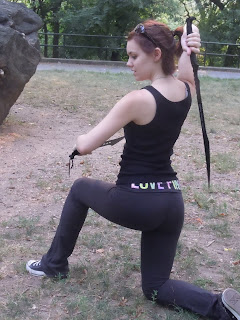 ANYHOO...I thought it might be fun, since I'm really good friends with fight choreographer Trevor Swann, to have him teach Lauren how to do a two handed sword cata and film it this fall for the website. :) (Note: Our usual fight choreographer, Mark Rosenthal, is in Germany for a bit and Trevor worked with him/us for the LDG photo-shoot so I asked him in for this project. Plus, he's the one that showed me these swords.)

We started off the evening by having Trevor teach Lauren how to hold the swords. After that they worked on stances and then fighting moves for within the cata itself. I filmed it but I'm gonna need Robbie's help transfering them to a Utube vid for people to see. But, I did get some pics of the whole thing so here you go! Enjoy! 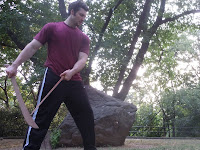 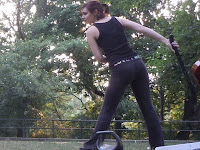 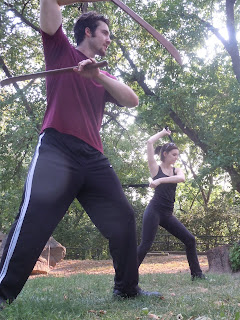 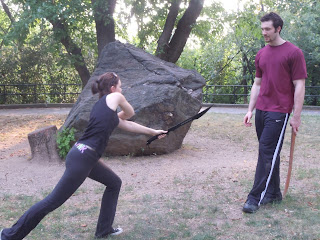 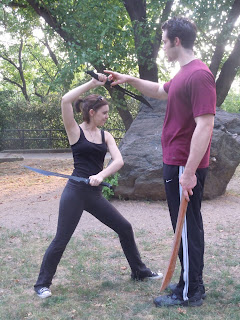 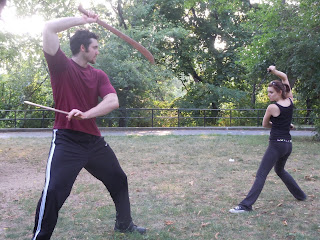 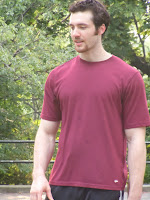 Many many thanks to Trevor Swann for his help, sharing his talent, and the giving of his the time to help us do this last night (and for the time he will put in from here on till the video is shot) and...

HUGE props to Lauren for standing out in the heat last night and learning one of the harder forms of fight choreography. She did really great for her first sword training EVER and on top of that, with TWO swords! I hope you all are as excited as I am to see this when it's done. It'll be posted to music...song is Ayria's 1000 Transmissions...just like in the 1st book (she does a cata on top of the rooftops of her and neighboring buildings late at night when she can't sleep). So stay tuned here to the blog...for that's where I'll announce the videos when they're done! 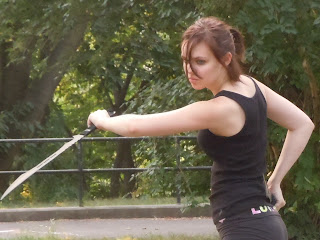 Posted by Tamsin Silver at 11:45 AM No comments:

We interrupt our regularly scheduled program... 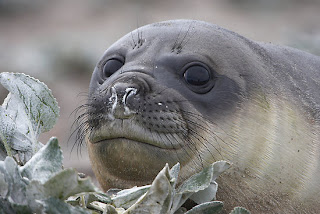 ...where we've been talking about LDG, to bring you the most adorable video I've ever seen.

This is worth your time to watch. I have NO idea how long it'll be on the web at this location but it's worth watching the whole thing. :)

My mom actually had the video itself emailed to her and sent it to me (as she knows I have a huge love for Sea Lions and Seals) today. Seems its been out for awhile but in case you've not seen it, like me...now you can.

Also, let me give props to the blog who listed it for me. Her name is Barbara Weibel and she talks about this video on her Feb. 11, 2010 blog post.

I agree with her that if its the animal that initiates the affection/attention then its acceptable to stay and enjoy that interaction.

He just can't seem to stop kissing this lady...flipping his tail up and being playful. He even pulls up next to her, putting his flipper around her like a man would put his arm around a woman when he cuddles with her. It's just priceless.

If you've not seen it...I hope you like it and it makes you smile.

And...if that link doesn't work...I found it HERE too. 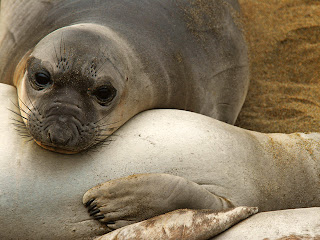 Posted by Tamsin Silver at 3:47 PM No comments: