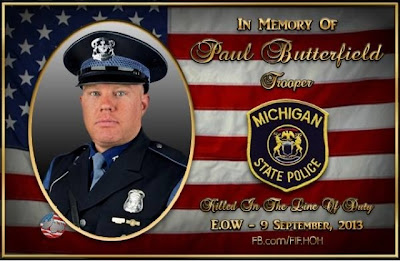 Today is a day to remember those who lost their lives here in New York on 9/11/01…but I am busy mourning someone closer to me…who was killed on 9/9/13. Trooper Paul Butterfield was shot in the head by a 19 year old boy in a stolen vehicle with his 20-year-old pregnant wife during a routine traffic stop. This man’s father was a cop, so he knew exactly where to shoot. Yet Paul was strong enough to hold on until he was air lifted to a hospital in Traverse City. Sadly, he died during surgery and we lost a great man…and I lost a piece of my heart.

I’ve known Paul since I was around 6 years old. He didn’t live on Westbridge Court with me and the other boys of my class, but he lived in the apartments down the road and happened upon us one day on his exploring of the neighborhood and we adopted him. We grew up building forts in the storm ravaged woods behind the court, swimming (ok, dunking me under if we’re going to be honest here…ha!) in the Hernick’s pool, and playing kickball/softball on the court. He once said to me, after we were adults, your mailbox was always 3rd base…and I had to laugh…cause it was funny that he remembered that. So few would.

I had the joy of dating Paul for a while in 2007 (into 2008). There’s a fun story that leads up to that and I’d like to share it. So, he was one of the few people I wanted to see at our 10-year reunion, but when he didn’t make it, I used the address they had in the books we got, and wrote him a letter to him in Hawaii. But I never heard from him. Come to find out, later on, he did get the letter, but it was just before he was moving back to the “main land” and had put it into a book and hadn’t found it again until later. When he wrote me, the letter came back b/c I’d moved to New York. Then MySpace was invented and he found me. We talked on the phone a lot because I lived in NYC and he was up in Manistee, MI. Then I went to visit him and things became more romantically involved. But we both knew I couldn’t move to Manistee…and he couldn’t leave, though he talked of becoming a police officer in Connecticut if he got laid off when Michigan was making their cuts around that time.

If it had been later in my life, like say…now, I could have left NYC. As a writer, I can be anywhere. But at the time I was doing theatre/running a company here…so the timing was off. The day of our 20th year reunion he met me at a store near my dad’s place. We shopped and caught up, and then we sat in his car and he let me know he’d met a great girl who lived near him that he was dating. It hurt, for I loved him dearly…but I knew she was a better choice for him at that point in my life for multiple reasons. Primarily because I couldn’t live in MI and she did. I wanted him happy more than anything, so I let him go without a fight. That wonderful woman's name was Jennifer and I was right to let him go…he spent the next 5 happy years with her, and then they got engaged. I was SO happy he was happy! Of course, part of me never stopped loving him. How could I not? He was a good man and he’d been a part of my life in so many ways since I was a child.

He loved to tease me about dodge ball. LOL! God, I hated that game! He admitted to always throwing it at me…and to knowing I used to step out of bounds on purpose. Oh how I laughed! He remembered tripping me in grade school more than once…which I didn’t remember at all. So I teased him back and said, “So you’ve always liked me. I see how you are.” He laughed and admitted I had a point. To know someone has thought highly of you your whole life, as you have them, was something that touched my heart in a way no one else could have. 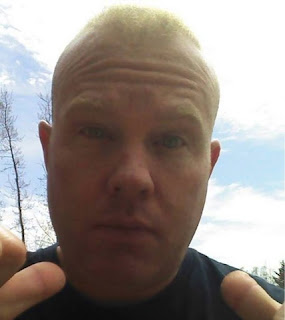 There are many memories of Paul that make me laugh…three in particular come to mind. One was that he wore balloons under his shirt and a skirt (and a wig if i remember correctly) to my birthday party when we were around 10 or so (there might be a pic somewhere, I'll look!). God how we laughed at/with him! The second one was when he scared Jenny Hargett and me on Devil’s Night on our way to TP some poor gal’s house. It was dark at the end of our street and we came around the corner and was on a run…and about ran us over! We screamed and he laughed, making us laugh as well. That boy was always running! Third memory has to do with running also. I went to watch him run a race at the high school track our senior year and he was way ahead of everyone else, as usual. We were screaming and yelling…and then he won…and ya know what? Everyone else still had a whole other lap to go! HA! We all just cheered as we went over to congratulate him, laughing the whole way at how everyone was still running for 2nd place. 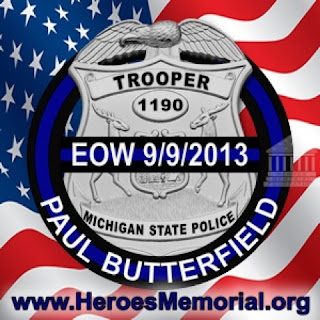 When I found out he’d become a cop…I was surprised. I’d thought for sure he’d have been a professional running trainer or in the Olympics. He was in the Pan-American games I believe. And he ran in Hawaii, where he also was the manager of a running-shoe store there…but he came back to the states and became a cop…which he loved. With how big a heart he had…it really shouldn’t have been that big of a surprise that he served. Being a cop means you take the hardest job and make it yours without a second thought. Once, we were at the bus stop and the neighbor’s cat got hit by a car and killed in front of us all. Paul was the one to go get the cat from the road and take it to the family. He’s always been a cat guy…pets in general really…but cats were a soft spot for the man (he has like eight!). For him to do that had to have been hard…but it was the right thing to do, so he did it, and then he went to school. I remember seeing him in the hall that day and I asked him if he was okay. He said he was, but his eyes said he wasn’t really…but he thanked me for asking, even though he had to be a big 6th grade boy about it. 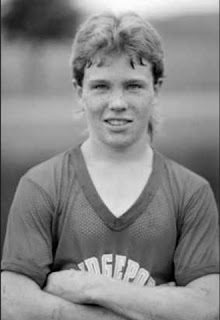 I always cared for Paul. Then I got to love Paul as an adult. I still love him. My heart is broken and I’m hurting more than I can really express. But once time heals some of this pain, I’ll have all the great memories of our childhood together and the time we dated. There will be the memories of our playing as children, talks over & about wine, our trip to Traverse City, our window-shopping, our swimming in the lake near Manistee, our discussions about dogs and music (he turned me on to Switchblade Symphony), our late night calls when he was stuck sitting in his cop car in the snow, and many other things that make me smile.

I treasured him. I hope he knew that. I will miss him immeasurably. 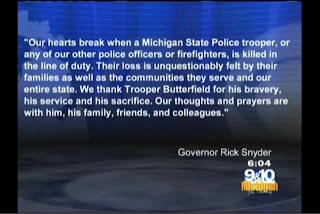 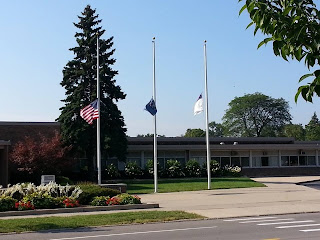 For those who have not heard about or know Paul, here are just a few of the links to see who he was:

http://news.search.yahoo.com/search?p=Trooper+Butterfield&ei=UTF-8&vm=r&fr=yfp-t-900-s&fr2=newsdd
Posted by Tamsin Silver at 11:00 PM No comments: