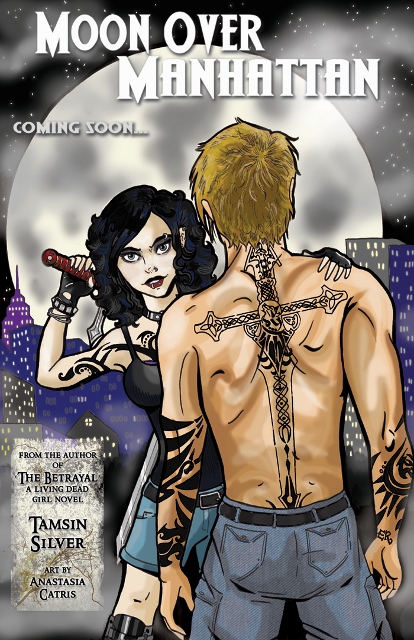 FIRST PROMO/CONCEPT ART FOR THE MOON OVER MANHATTAN GRAPHIC NOVEL!
(seeing as I couldn't post this beauty on FB, I shall force people to come here to my blog...mwahahaha!)

Ana Catris is bloody brilliant! If you like, share this with people you know!
This werewolf graphic novel series is going to be EPIC!

And btw, I'll have 11x17 posters of this for sale at both Heroes Con and NYCC!
And hopefully at NYCC the artist will be on hand to sign!

Model for Denika: Lauren Steinmeyer
Posted by Tamsin Silver at 12:00 PM No comments:

In case you can't tell, I'm really excited about it. :)

I'll be bringing cool new things...including free swag, a new free story, and artwork by Ana Catris for my Moon Over Manhattan's Graphic Novel as well!

Not only that...but I'll have John G. Hartness and Emily Imes at my booth (and their f*cking awesome)! We three represent Indie Writers. No, seriously. We each are published in a different ways, representing the three ways the Indie Author exists.

Me? I was picked up by a E-publisher who goes to print after a specific number of e-books are sold.

Emily? She's fully self published! (And she writes music too, btw!)

John? He started off as self published...but he sold so well, he got picked up by a publisher who does both e-books and print.

So you see...we ARE the three avenues of the Indie Author. I think that's FANTASTIC!

John and I will have some print copies of our books available, as well as e-copies. Emily will have e-copies as well as her music on CD! I will also have books in print and on CD...and all the other fun stuff I mentioned before.

If you love to read Fantasy/Sci-Fi OR you're a writer and just want to talk shop with us...swing by Booth 2167 at NYCC this year! We'd love to talk to you!

I'll keep you posted with more info as I have it!

OK! My first convention is coming up hard and fast! Heroes Con in Charlotte, NC is June 22-24 and I will BE THERE! Me and two other wonderful Urban Fantasy authors...John G. Hartness and Stuart Jaffe...will be at a booth together. No idea what our booth number is at the moment, but I'll keep you posted once I know. If nothing else, look for the booth under John Hartness' name (they only put one author's name on a booth).

I will have printed copies of The Betrayal as well as copies of it on CD for your computer/Kindle/Nook. And YES, my prices will be LESS than Amazon. PLUS...I will have a poster or two by Ana Catris showing you the beginings of the artwork being done for the our Graphic Novel, Moon Over Manhattan.

So if you're in Charlotte or the surrounding area and Fantasy/Sci-Fi cons are your thang...come to Heroes Con...and stop by to see us! Pick up the book or if you're not sure my writing is your style, I'll have a free short story I worked on just for the convention to GIVE AWAY!

That's right! 50 pages of story for FREE! It's the first part in a series of short stories about Mia Petrovskii, a werewolf in NYC in the year 2144 (blurb below). And as this is Heroes Con...the title of the first installment of The Clandestine Conflict is called....."Heroes Square."

So...put it on your calendar and come on out! I'm looking forward to seeing some old friends (I used to live in the Charlotte area btw...just before NYC) and making a lot of new ones!

In the year 2131 the human's thought they could fix the dissolving Ozone Layer, and global warming, by releasing a biological agent into the sky.

Luckily, the Clandestine People had foreseen this outcome and saved as many of the humans as they could.

Prejudice. It’s not as old fashioned as you might think.

Posted by Tamsin Silver at 11:00 AM No comments:

It's a Small World Sometimes...

In NYC we often say "It's a big city, but a small world."  This is because we're all connected one way or another on this damn island. Six months can't go by where you don't suddenly realize Friend A knows Friend C, even though you never introduced them. For example, 2 weeks ago, my friend Terri from the Goth/Industrial Club Scene shoots me a Twitter message that says "Kathy from 2nd floor says hi." It took me a minute to realize she meant one of my fave co-workers on my old floor here at the hospital. Strange things happen here.

So, that said, some friends and I were discussing things like this the other day and I told the following story. Afterwards, I thought you all, the massive 9 who read this blog, might find it funny. So here goes...

When I was 5 years old, I lived in Bay City, MI. I remember the house we lived in very well, even until this day. Now, considering that by 6 years of age I was out of that house, that's saying something for my old brain.

The house wasn't a full two story, but the primary part of the house was up higher than a normal 1st level and we had a lower level back room that I played in a lot while my dad played music or read. Somewhere in my many photo albums, there's a cute pic of me sitting on the back of the couch behind him as he sits and reads on that horrible plastic, tan sofa. Oh the 70's...

Anyway, the house was close to being in the center of the block, and across from my house was a fenced-in, open area of grass. I believe it was part of the school's land that was across the street, down at the end of the block. Now, there was a boy that lived next door to us...and he liked to torment me. Yes, sometimes we'd play together, but often he liked to chase me, throw things at me, chase me with a bat, and generally be a dick...so to speak.

One Saturday morning I was watching cartoons in the living room and I hear this noise behind me. It's him. He's throwing small pebbles from my driveway at the window to get my attention. It was a nice, sunny, summer morning, and though the two small windows on either side of the large livingroom window that faced his house were open, I must've not heard him yelling up at me. (I get very into my movies and TV shows...what can I say?)

I looked down and reacted much like I do even today when you interupt me watching something...I get slightly perturbed. Even so, I asked him what he wanted. He told me...no, maybe "demanded" is a better term...that I come down and sweep his back yard's lawn.

I'm very sure I made that face at the time too. And yes, he said sweep, not mow. Obviously I told him no. And he demanded it again. I think I told him something akin to "when hell freezes over" but in 5-yr-old speak, and went back to my TV show. (Ah...not one for orders even back then.)

We moved shortly thereafter to Bridgeport, MI...where I spent the next 17 years in the same house, and really never thought of that kid again. Well, not often anyway.

Fast forward to college. I'm going to a community college and my boyfriend is from, and lives in Bay City. One weekend his parents go out of town so I went to stay with him and his brothers. When I arrive, Shane is sitting at the table with a pal of his from high school. We are introduced and we all sit at the table to have a beer and chat.

The kid across the table keeps looking at me oddly and finally says, "Did you ever live in Bay City?" (You know where this is going, I'm sure, but humor me and continue reading)

I told him sure, when I was like five.

A look of realization comes across his face and suddenly I understand. He's the dick from next door who tried to order me to sweep his lawn. Who chased me with a bat. Who tormented me on a regular basis.

..............I proceded to chase that SOB around the table and then the house with a wooden spoon (it was handy) yelling something about him being a tormenting-little-fuck-of-a-child...asking him if he still like to order women around.

Shane was at a loss.

We ended our chase by falling on the couch laughing our asses off and then I explained to Shane.

I never saw that kid again sadly enough, and I don't remember his name. But looking back...if I hadn't moved...something tells me I mighta married that boy.

xo Tamsin :)
Posted by Tamsin Silver at 2:24 PM No comments: