Alas...tis a new year...and it feels no different, except its colder. 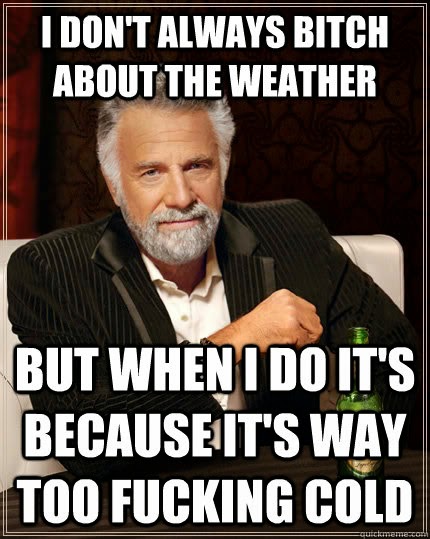 I think the title of this blog entry and the pic say it all. Catch y'all later!

Hey there! And happy January 2015! It's effing cold out there, people! It is currently listing that the "feels like" temp is 14 degrees (scratch that...it just dropped on my weather app to say "feels like 11 degrees")...actual temp is 25 I think. It's too cold even for snow at this point...and btwn 7 and 10pm tonight it'll drop from 22 to 8 degrees. So, basically while I'm at the dog run that fast drop is going to be happening. Hmmm...I wonder if I'll be the only one there...LOL!

Welcome to 2015...I ended up having a lovely Christmas and a fun night on NYE...not amazing, but fun. It was great to see Tom Shear again (Assemblage 23) and give him a hug after he performed an amazing set on stage. I actually got a non-blurry picture of he and I this time around so...woot! Here we are...and yes, I'd had 3 drinks at this point so if you think I look a bit buzzed and sweaty, you would be correct! 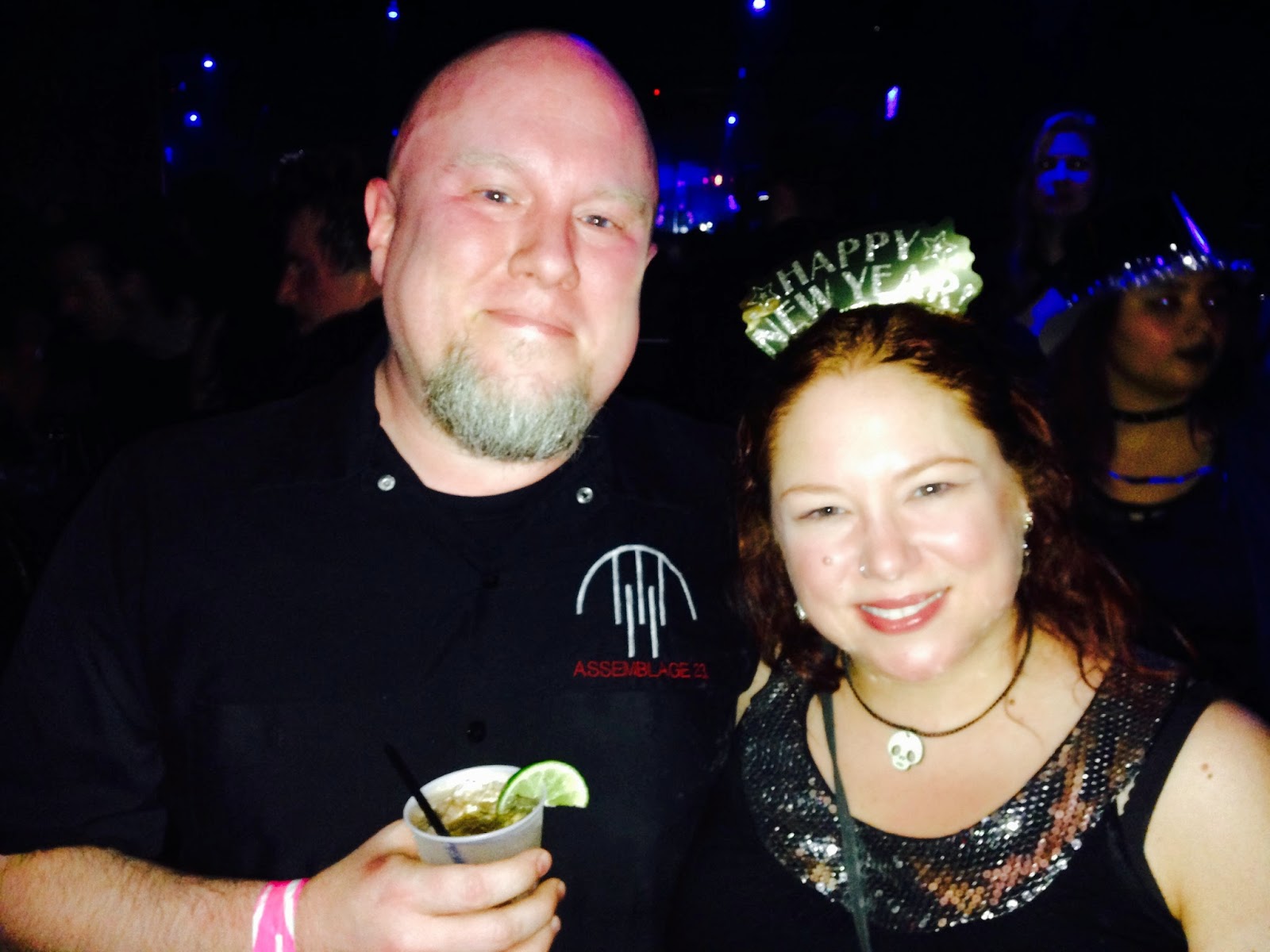 Other than that...I got a few pics of his performance... 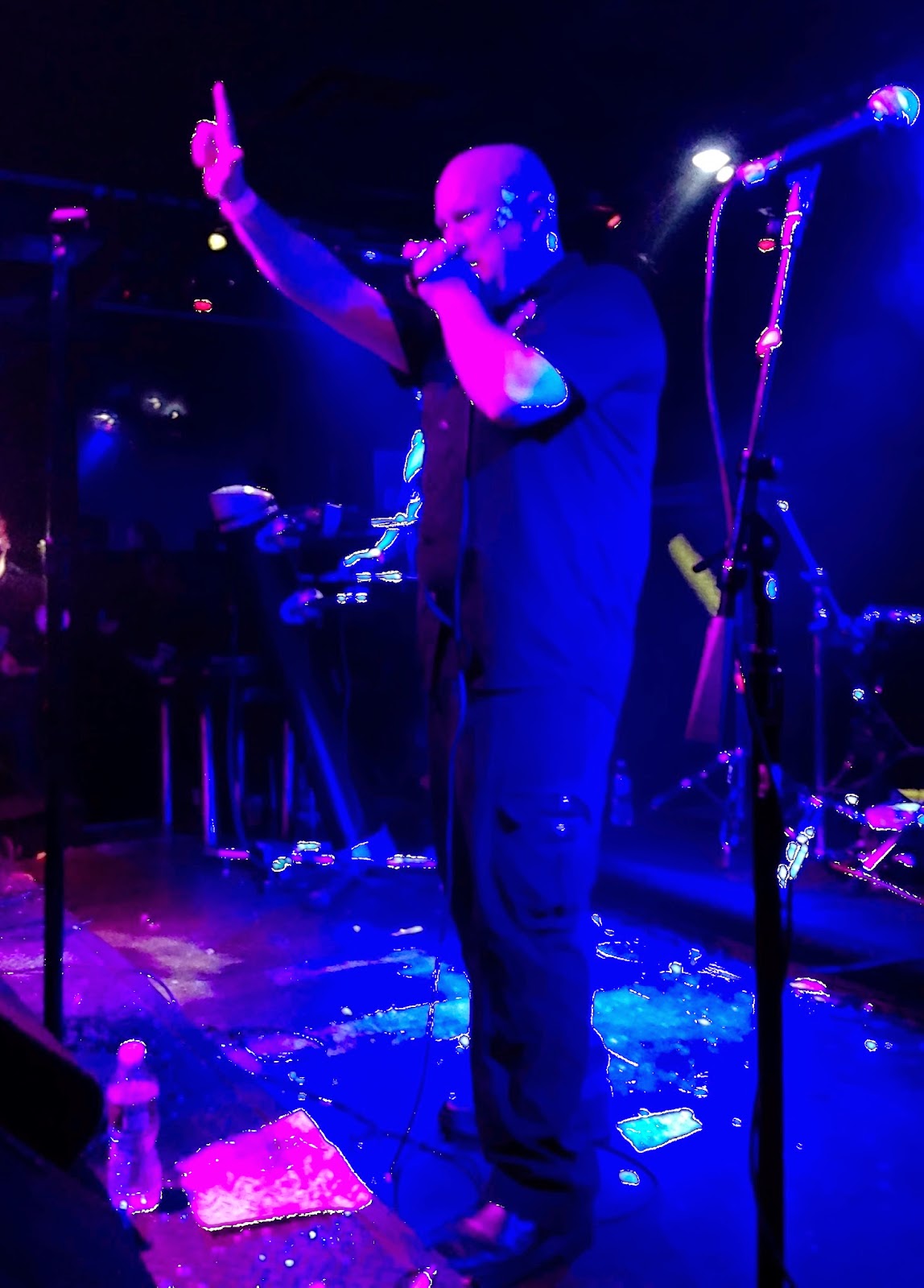 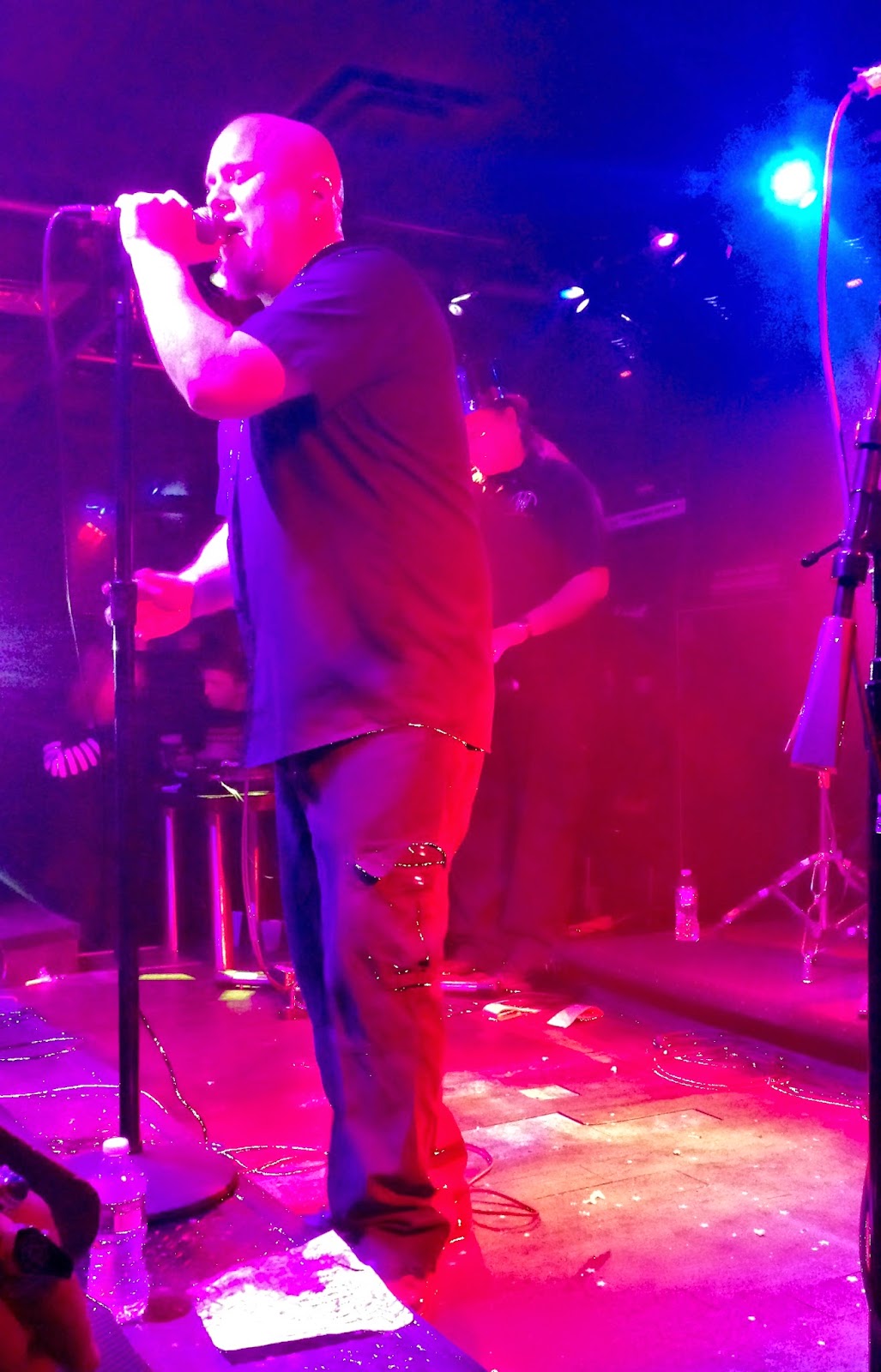 And is it just me, or does he remind you of Paul Butterfield in a way?


I think part of it was in how he's built and how he moves (plus the cheeks). It hit me during a song he was doing and I had to fight crying. I've been having trouble lately...missing Paul a bit more...crying more often than I'd like.

ANYWAY...We won't go down that path...let's talk holidays and fun!

Here's Lauren and I that night: 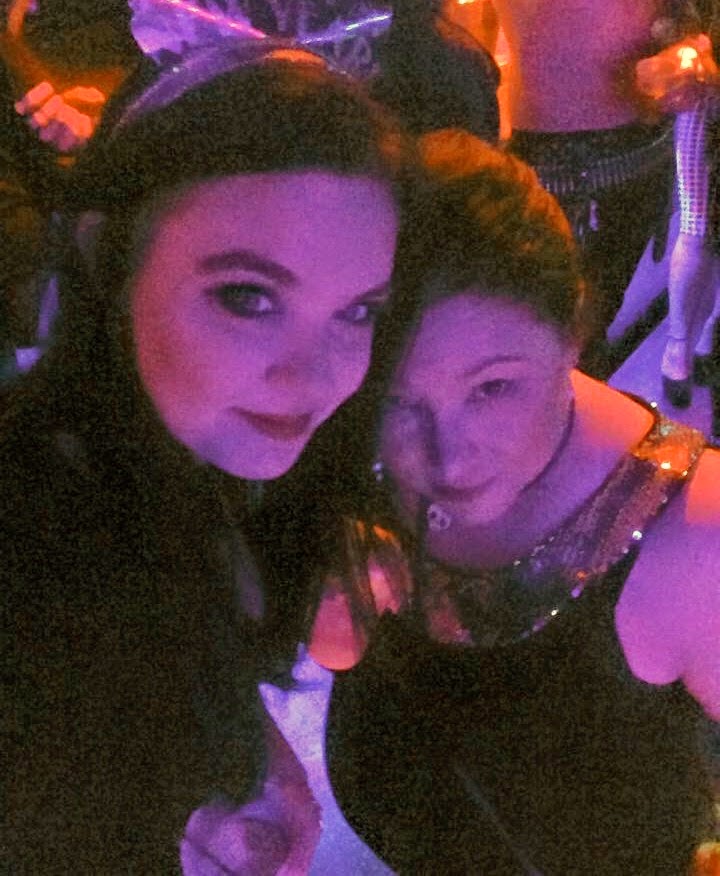 My hair is pulled back at this point b/c its hot in there! And yes, I'm wearing silver sequins! So there!

Other than NYE...Christmas was lovely! I slept in until I heard the two-some in the back of the apartment start to open gifts. So I toddled out with the dog to show him/teach him about his stocking (my roommate Emily has the whole thing on video...we really should post it), and then I opened things. I got warm socks, dress socks, tea, tea pot from Teavana, a air popcorn maker, a thing for Kadin's stuff to hang on the wall, and....FINALLY...A NEW FRIGGIN COAT!

HUGE points for my step mom on this one! She found the perfect coat for me w/o me even being around to try it on! Woot!

Anyway, where was I? Oh yes...after gifts I put a casserole together, opened my big gift from my step-mom (she surprised me with a hip length black, down jacket!) and got ready to leave. THEN my family face-timed me and I had to admit I'd opened already because I was almost out the door. But I got to see them open their stuff from me instead of just hear it as usual, that was really cool.

After that, we all headed to Brooklyn to meet up with friends to see "Into the Woods" and then I sat down with them for a lovely dinner. I didn't get home until late and it was lovely to just lay around the next day.

However, I think the best Xmas photo was taken a few nights later at my friend Josh and Sarah's apartment (after Kadin had spent the past 24 hours in Connecticut to play with other dogs in wide open spaces...it was lovely). 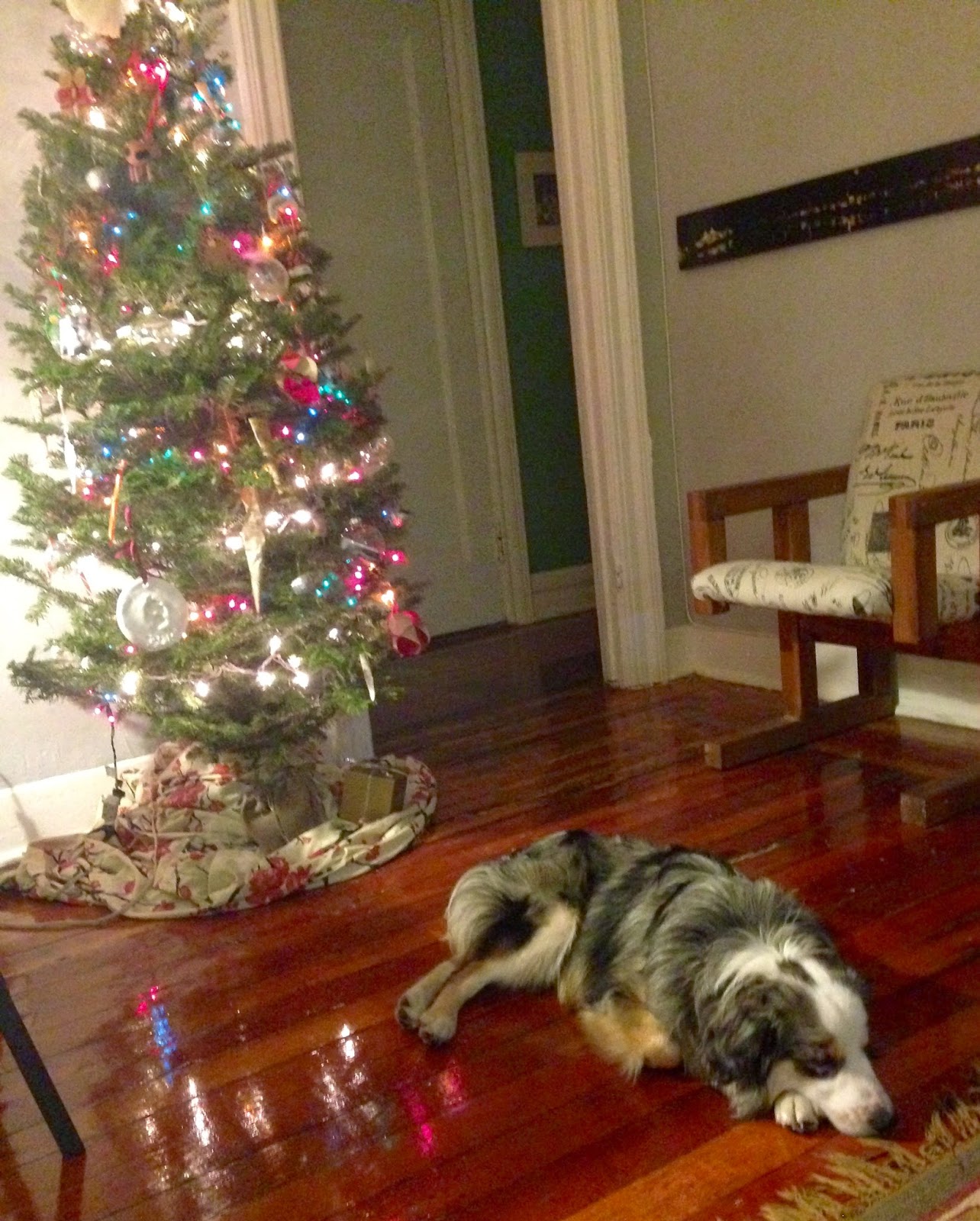 Anyway...the holidays were great...as was my mini-vacation from work...which I'm back at now, so I best go work on that spreadsheet now that lunch is over. I'll have more pics from our trip to CT and I'll have my thoughts on my biggest happy moments of 2014...so stay tuned!

Posted by Tamsin Silver at 1:40 PM No comments:

Ok...correction...I miiiight be awake because of the puppy...but I'm still in bed and if I'm online it's only because I'm messing with Facebook while in bed.

That said...I hope you had a GREAT swing into the new year...whether or not you partied, drank at a bar with friend, sat at home with movies and/or "Dick Clark’s New Year’s Rockin’ Eve with Ryan Seacrest", or were like my mom and asleep before midnight hit because...well..."fuck new years"...LOL!

I personally hate this "holiday"...I do! I'm single and this "holiday"...much like the other invented "holiday" (VD) is very much a couples sort of night. Yes, I know it doesn't need to be...but it OFTEN is looked on that way. So it rubs the "being single" in your face but with a extra side of horse manure for that extra special zing.

I personally prefer gathering of friends at a house party....or...ummm...I should probably call it an apartment gathering as I live in NYC, eh? ANYHOO...I prefer that over a bar or club. Mainly because I am not fond of a night out where drinks get spilled on me, some creepy dude hits on me (and might try to kiss me at the stroke of midnight), and then vomits on the floor by me later. Add on traveling dangers (driving/taking a cab/subway miscreants) and thant YOU PAY OUT THE ASS TO DO IT...and you have a recipe for a crappy night out. Yay. Gee...we should do this all the time...no, wait, once a year torture is good enough.

Last night, I went to the Vampire Freaks New Years Eve bash in Queens. Yes...mother effing Queens. Ugh. Lauren, my best friend here in the city, is on the flyer...so we had to go. Besides, I really like the core group of VF friends a lot (I'm looking at you...Annabel, Jet, JC, Vassa, Austin, Sir William, Joey, Candace, Cloe, Nicole, and others who hang with this group on a regular basis that I'm missing because I'm tired)...so I wanted to be there. PLUS...this is the first year I actually get to celebrate this "holiday" with Lauren. Ever since we met, in 2010, she's either been back home in MO or working at her bar here in the city on this night...so we get to hang...so hence, I didn't opt for staying in. Which I've done.

I think one of the best NYE nights I had was in my apartment in Queens (on the Brooklyn border mind you) with my roommate Michelle. We had food, drink, and a bunch of  DVD's of movies that were up for Oscars that year (back then, finding bootleg DVD's in NYC was easy-peasy). I remember we watched Finding Neverland and  RAY that night. Two beautiful movies...but damn, Jamie Fox was so amazing in RAY, that it was that movie that stuck in my head the most. Plus, if you remember correctly, he swept the awards that year.

Other than that, I think the best one was when I was in high school. I was with my church youth group at a big house party (that's right, boys and girls, there was no alcohol and very likely parents around and we still had a good time...imagine that...) and we all went outside at the stroke of midnight and cheered, sang, and watched the snow start to fall. If I remember correctly, there was a boy there that night who I had a thing for who spent 90% of the night talking with me...so that's probably another reason I enjoyed it...but overall, I loved it because it was just friends and there were no stupid behavior or drunk people to deal with. Oh the days of pre-21...how you were so much better for this holiday. The minute I could go to a bar for NYE, I hated it.

I hope YOU had a great night! As I said, I'm writing this in advance, so I'm hoping I had a great night! Ha! If I got pictures from the party, I'll post them! But...I warn you, I'll be in my gothy gear and probably big hair...so prepare yourself....LOL!

So, go have a little bit of the hair of the dog if you're hung over, plus some water with electrolytes, and some dry toast and you should be right as rain by later on tonight.

Best of luck in 2015!!! May it bring you happiness, love, contentment, financial stability, and the sense of fulfillment in your life. For honestly, if everyone had these five things, there'd be no war or protests, or the killing of one another.

SO here's to those five items and you finding them in this new year!

Posted by Tamsin Silver at 10:00 AM No comments: