That's right! The lovely ladies at Fallen Angel Reviews, who interview authors of the Fantasy genre (specifically the Vampire/Werewolf kind) were nice enough to interview me over the holidays. And today it is up on the site. YAY!

MANY thank you's to the ladies at Fallen Angel! They were fantastic to work with. Great personality as well as professionalism.

You can read the interview HERE!

Sometimes its for the best... 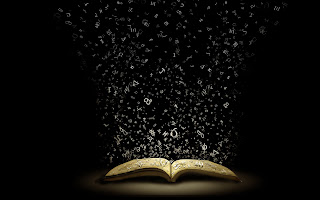 Today I'm at my office doing some writing. It's quiet here. I have an ergonomic keyboard and a comfy chair...but most importantly, I can stay focused easier here than at home...where my dog, the TV, my comfy bed...all pull for my attention. Oh, and the fridge...it calls to me too. If I want work done, best to come here.

Today's primary goal was to fix something. You see, when I originally wrote LDG2, called Shattered, I wrote it like I did LDG1. From MANY POV. If you've read LDG1 you know that we've narrowed that down to a set of 7 people who tell this story. The idea is that Atlanta is using their journals (Tiny Spoiler: Which she gives them all for Xmas in the first book) to write these stories, after the war is ended.

Problem is, I've got scenes from Phoenix's perspective and Stephan's (so far) in this version of hte 2nd book and since they are not one of the seven, I had to rework them to put one of my seven there. This may prove to be a HUGE problem in book three, "Stained Glass,"...but I'm trying to do what I can to keep it down to the seven.

Today's work has proven to me that sometimes change is for the best. These new scenes work well and condense things. Here's to hoping I can continue to do this.

Now, back to the book! I'd like to get this in to the publisher soon so you all can get your hands on it by summer.

Tamsin :)
Posted by Tamsin Silver at 3:47 PM No comments:

Well, as some of you know, a few of my characters are based on people I know. One of them is Amanda Cane (a vampire who is an animal rights activist...yes, that's supposed to be ironic) who has an evil twin, Alicia Cane.

These two ladies are loosly based on Amanda Caines-Wright. She formed and heads up the industrial band, Tattermask. I did a Tumblr post about them last week, actually. For that, go HERE. If you like the music of Tattermask...have no fear...the band will show up in the books later on in the series. But Amanda...well...she shows up in book one.

Many thanks to Amanda and Tattermask for letting me use them in my series and supporting my work! I am hoping they're playing a gig when I'm in Charlotte the weekend of June 22-24 for Heroes Con. That's right! I'll be at Heroes Con with John G. Hartness, selling our books...so you'll have to come find us in all the convention madness! I'll even have printed books to sign and sell! Woot!

TATTERMASK IS WRITTEN INTO AUTHOR TAMSIN SILVER'S "LIVING DEAD GIRL" SERIES
Love Fantasy novels? Well, you can soon read about Tattermask in one. NYC author Tamsin Silver weaves webs of witches, werewolves, and vampires, in her "Living Dead Girl Series," then tops it off with a neurotic animal activist named after our own Amanda (hmm... sounds like a dead ringer...) who sings in a band... and also has an "evil" twin. Want to learn more about it or buy the first book? Head to http://www.tamsinsilver.com! The band's appearance doesn't come until later, but Amanda's character is in the first one ;)
Posted by Tamsin Silver at 5:21 PM No comments: 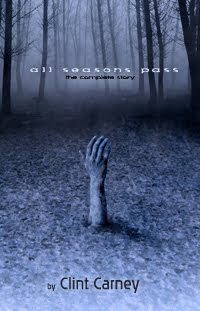 This fall when I went to the concert for Imperative Reaction/God Module/System Syn it was my second time seeing System Syn and meeting the founder and lead singer, Clint Carney. He is a good friend of my gal pal, Annabel (DJ AnnabelEvil) who is the manager of Vampire Freaks. She introduced him to me at the Pre-Triton Festival party. I saw him perform at Triton, spoke to him there, and now I got the chance to speak to him again, after the 2011 show in NYC.

Clint is not only a talented song writer/musician (he is a member of Imperative Reaction, God Module, and his own band, System Syn), but he's also a talented artist (his paintings can be found online for sale from time to time, follow him on Twitter to see more). On top of that, he's a well spoken, humble man who was both polite and interesting to speak with. What we spoke of this time around was that we both had been published this year. Yay us! Right? RIGHT! His book is a self published novella that you can get to go with his newest CD. That's right, WITH his CD.

System Syn's newest album, All Seasons Pass, is something unique and that is why I'm reviewing it for you all today. Even if you're not a fan of Industrial music, I think you'll find this interesting.

In 2010 a woman in California went missing. Then she was presumed dead, killed by her husband. Clint followed the story in the papers but due to how it intrigued him, he got in touch with those involved in the investigation. He was allowed to learn what they knew, as long as he didn't divulge real names and so on. He took what he learned and wrote a novella. He also wrote an entire album based on the events that revolved around this situation.

The album tells the true story of the final tragic days of a young woman, as seen through her eyes and through the eyes of those around her.

The book reveals the real life story that inspired the album, including never before published photos and evidence from the investigation.

Did her husband kill her? Did she just run away? Did she have a lover? Did he kill her? Did she kill herself? Or was she on the run? You only can find out if you read his book. It's a tragic tale and yet, one I feel people should know. This poor woman was plagued with depression. Depression her mother wouldn't even acknowlege. How can YOU accept something about yourself when your family doesn't? How can you beat it if you don't admit you need your medication or have support?

The music Clint has devised to go along with the story is amazing. He gets into the heads of multiple characters (including hers) and takes you on a journey. The music is powerful and the lyrics are quite compelling. One of my favorite lyrics comes from the song, Homecoming. It's written from the perspective of a man sitting, watching her house, waiting for her husband to come home...to see if she's with him or not. For he knows if she's not with him, she's very likely dead. He says, "I thank you for the time I have to wait." For in that time, she could still be alive and he's hoping...hoping she is...for he knows something no one else knows.

But I won't spoil any more for you...I recommend this album/book combo (only $26 on their website...click the title of this blog to go there) to writers, musicians, and lovers of industrial and rock music. The music itself is not as heavy as God Module or even some of System Syn's other stuff. I think it speaks to a wider audience.

I rate this with five out of five stars...

So go snag this book/CD combo OR...you can aways find the CD on iTunes!

P.S. You can also follow Clint on Twitter: @SystemSyn
Posted by Tamsin Silver at 3:10 PM No comments:

If you purchased a copy of The Betrayal (A Living Dead Girl Novel) from Amazon or B&N and the book "ends" in the middle of the bar scene in NYC...you HAVE DOWNLOADED A BAD COPY! The book ends after a large battle.

Please email me at tamsinlsilver@gmail.com ASAP to let me know. I will then contact you on how to get a free, corrected copy from my publisher AND they'll give you a free book from their catalog as an apology.

Thank you and we're so sorry!

Tamsin
Posted by Tamsin Silver at 8:13 PM No comments: 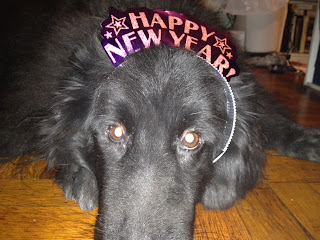 My plan for NYE 2012 was to stay home and do a Boondock Saints Marathan (I know there's only two movies but I was leaving time in there to watch the ball drop and laugh at all the crazy people in Times Square on my TV), cook a loverly dinner (for me and the dog) and maybe do some writing if the mood struck me. ---For I am in the process of editing LDG2---

On late Friday night I received a invitation via Facebook to a "invitation only" private party at the soon-to-be-no-more Vampire Freaks store. Not much else could've differed me from my "stay at home" plans except this. You don't turn down a private party. 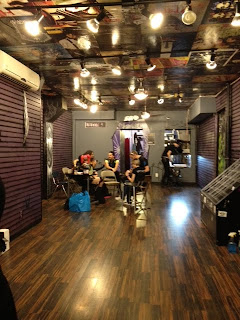 As you can see above, the store is empty. Jet has decided that after three years, he's going back to the store being just "online." So, you'll be able to find the clothes at
fuckthemainstream.com. The money he'll save is going to be put towards more club nights, bringing in more bands, and supporting the goth/industrial social scene of NYC more. I'll miss that store a lot...but I think he's smart. Btw, in case you didn't know, VampireFreaks.com is the largest goth/industrial social networking site in the world. So...it makes sense for him to create some opportunities for people to meet up in person more.


My girl Annabel was there of course: 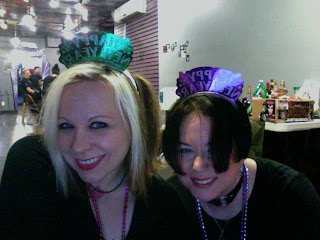 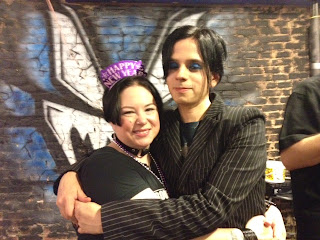 We all had a fun night! It was a small party and in the end we shimmied on down to the Pyramid Night Club to dance for a bit before heading home. Speaking of, by the time I did get home I was sober and it was 5:30am! Ha! My roommate said, "You partied like it was 1999!" I laughed. I sorta did. Which is funny considering my original plans.

Anyway, I hope you too had a lovely New Years night and that you got home safe and that the next day wasn't too painful.

Much love and Happy New Year from me and Keziah (yes, he's wearing my beads and tiara in this pic...forgive me, I couldn't resist! I blame the late hour for my behavior.) 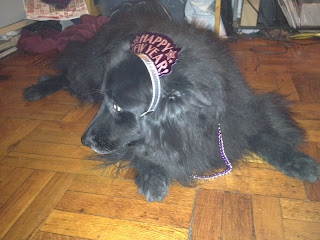