A friend of mine from the gym has a pal in Florida who is an avid reader of the Vampire/Witches/Werewolves/Etc. genre. Reads it all. Who better to have an opinion of my series? So when my friend emailed to let me know she'd bought a copy of it for her friend Lisa in Florida, I was thrilled!

Well, today I was given the gift of a review by this avid reader of the genre!

HUGE thank you to Lisa Mena for the following review:

5 out of 5 stars
A really fun ride!
By Lisa Mena - This review is from: The Betrayal (A Living Dead Girl Novel) (Kindle Edition)

I had a great time reading this book and highly recommend it to any fan of this genre. It reminds me of a more grown up version of the House of Night books. I really look forward to the next book in the series.

I myself read the YA series of the House of Night books. And though I wish to bop Zoey (the series' leading lady) upside the head every now and again, I enjoy the series (I won't lie, I'm in love with Stark) immensely. It is a very character driven series and I like to believe the same for mine. So, to be compared to the House of Night series is a really wonderful compliment.

So thanks again, Lisa! I'm really happy you liked it! The 2nd book should be out in early 2012 if all goes as planned.

If you've read "The Betrayal" and enjoyed it. Please, toss up a review on Goodreads or your blog or Amazon and let me know.

Have a great week!

Okay...I wanted to tweet about this but hell, it's too involved for just 140 characters.

I just had the oddest conversation here at work.

Let me preface this by saying that the floor I work on has two bathrooms. One is a restroom with a single toilet in it (it is marked "Women") and the other has a urinal and then a seperate stall (that locks) with a toilet in it. The door to that bathroom is marked "Unisex" and the door locks.

So here's where the strange conversation comes in.

Some chick on our new floor, no idea who she is...but we'll call her Bridgette. She looks like one. She walks up as my boss is telling me and my coworker that there is talk about labeling the Unisex bathroom "Men" instead. And I say, "That's fine, but if I have to go and the ladies room is busy, I'll be stepping into the men's room."

Bridgette looks appauled and hoity toity (did I mention she looks wound up so tight that the Ferris Beuller line about coal and diamonds would fit here?) and says, "That's innapropriate!" And I'm thinking she's kidding. So we all keep talking and she's wickedly infatic that for moral reason (no joke) we need to seperate these bathroom titles. Again I joke around and she again gets in a huge huff, "That is innapropriate!" This time she is almost spitting she's so flustered.

We're all at a loss.

Then Bridgette says, "It's not appropriate for a man and a woman to be in a bathroom together."

Ah...suddenly its clear. She thinks I'd go into there when a man is using the urinal or I'd be in the stall and let a man come in.

I find out later my boss turned to my coworker in the break room and said, "Bridgette's crazy."

LMAO! She didn't realize there was a lock on the door! How are you up on this floor for YEARS and not know that?

I've come to the conclusion that Bridgette is nuts...end of story.

And that is my crazy office story of the month...year...whatever.

Have a good day all...and remember...men and women shouldn't share a restroom! ;)

P.S. I leave you with funny Unisex Bathroom signs I found... 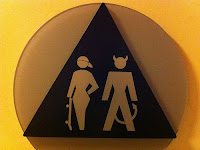 Sunday night as I lay in bed I found myself thinking of writing this blog entry. Mainly because I've been having a dialogue with myself. (Don't give me that look, you do that sometimes too...I'm not crazy...well, not all the time ;)

Anyhoo, the dialogue I was having concerned a friend of mine. As I never use real names here, we'll call her Alison, Ali for short. Ali told me of a situation she's been dealing with and it got me to thinking about friendship and how as an adult it changes.

I know Ali through my theatre world...let's make that clear first and foremost as I feel it pertains to the issue at hand.

Ali has theatre friends and non-theater friends (as I do, which is why she came to me) and was debating the friendship of those non-theater-people. Why? Lack of support. You see, we theatre people are used to other theatre people plugging our shows for us (even if they've not seen them or if they did and didn't think it was amazing) or doing reviews on blogs of our shows for us and finding something positive to say even if the show only had a few high points. Theatre folks just support. Period. They are there for you, not your show.

So when her non-theatre-friends didn't act the same way she was concerned. Why would they not be supportive? Why would they be so closed to showing support "no matter what"? She was asking herself if they were really her friends and if she should limit her interaction with them.

See...I can understand this as I too am a theatre kid. I push my friends shows (be it a play or a band performance) even if I haven't seen it or have time to go to it. I push a friend's jewelry site even though I haven't bought anything and hell, I even promote my friend's new book that just came out before I've read it! Why? Cause I'm their friend...that's what friends do. Right?

Ah...see...that's my theatre background speaking...like Ali's. In the artistic community you know there is very little reward. Not everyone gets discovered at the age of 11 **cough cough Daniel Radcliff cough cough** and goes on to be this years Entertainer of the Year per EW Magazine (Congrats on that btw, Daniel! ) Yeah, like DR reads my blog! Ha! Anyhoo... Because of that fact, we all are supportive of each other's work NO MATTER WHAT.

I told her not to expect that from everyone. It didn't mean they were any less your friends, they just didn't have the same background. I asked her if she really wanted to remove those friendships from her world. If she would be fuller without them. Ultimately her answer was "no."

So, the next day I saw a show of one of my best friends. In that show was a guy I've not seen in FOUR years! His name for the sake of this entry is Nate. Nate and I weren't close, but we were connected through my best friend's work. Anyway, when he and I chatted after the show (at a bar, of course) we discovered we were both from Michigan, that we both attended the same college in Michigan (he years after me), that we both knew a slew of the same people, and that we both play Euchre (It's a card game mostly known in Michigan so don't wig if you don't know what it is...it's okay, we'll forgive you. Mind you, I would swear I majored in Euchre my 2nd year of Community College...but, that's neither here nore there, yes? Moving on.). It was hilariously amazing!

Here is a connection I didn't even know I had in the city. Here is a guy I'm connected to on TONS of levels and it opens up so many things...a new friendship that passes "casual aquaintence" is the main one. It also made be bubbly happy to connect to a life I left behind years and years ago. I may have only been at Western Michigan University for two years (I didn't graduate from there) but those two years felt like five and to open up those memories was wonderful! Thus, as I sat on the train Monday night heading home, I thought about this new connection and then thought of Ali.

As an adult you have different types of friends. Some are more supportive than others, some are more involved in your life than others, but all of them are important for one reason or another. I think that you can't classify them all the same...you can't hold them all to the same standard. They're not the same type of people with the same background. So how could they be the same?

I sent Ali a text saying as much and she responded that it is true. And though some of your friends don't support you the way you wish, tons of other friends do, and that's what you need to dwell on. The others? They're still your friends, possibly with limitations, but it doesn't mean the love you less. They're just different. And if all the people in your life were the same, I feel you'd be an unbalanced person.

So...those are my thoughts on connections and adult levels of friendship. What are yours?